Palo Alto’s earliest recorded history is from 1769, when Gaspar de Portolà discovered an Ohlone Indian settlement. A plaque is erected at Middlefield Road and Embarcadero Road to commemorate the remains an area of known Indian mounds. 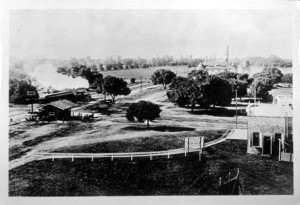 The city got its name from the tall landmark Redwood tree, El Palo Alto, which still grows on the east bank of San Francisquito Creek across from Menlo Park. One trunk of the twin-trunked tree can still be found by the railroad trestle near Alma Street in El Palo Alto Park (the other trunk was destroyed during a storm in the late 20th century). There a plaque recounts the story of the Portolà expedition, a 63-man, 200-horse expedition from San Diego to Monterey from November 7–11, 1769. The group overshot Monterey in the fog and when they reached modern-day Pacifica they discovered San Francisco Bay. Portolà descended from Sweeney Ridge southeast down San Andreas Creek to Laguna Creek (now Crystal Springs Reservoirs and the Filoli estate, and thence to the San Francisquito Creek watershed, ultimately camping at El Palo Alto from November 6–11, 1769. Thinking the bay was too wide to cross, the group retraced their journey back to Monterey, never discovering the Golden Gate entrance to the Bay. 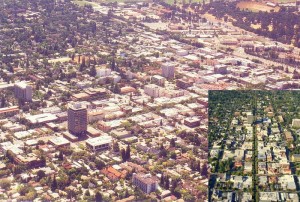 Palo Alto, north of Oregon Expressway, is filled with older homes, including Craftsman and California Colonials, some of which date back to the 1890s but most of which were built in the first four decades of the 20th century. South of Oregon Expressway, the homes, including many Eichler-style houses, were primarily built in the first 20 years after World War II. While the city contains homes, condominiums and townhomes that now cost anywhere from $800,000 to well in excess of $40 million, much of Palo Alto’s housing stock is in the style of California mid-century middle-class suburbia. It has highly rated public schools (Palo Alto High School and Gunn High School), a very high quality of life, numerous parks and open space reserves, and a vibrant downtown area including University Avenue which leads to the entrance of Stanford University. The median home sale price for all of Palo Alto was more than $1.3 million in 2006 and $1,363,000 in July 2009. In 2010, Palo Alto ranked as the 2nd most expensive city in the United States, at $1.48 million. The primary drivers of housing market values in Palo Alto are the schools which test at some of the highest levels in the Bay Area, Stanford University, and its proximity to Silicon Valley and the multitude of high tech companies within a short drive.