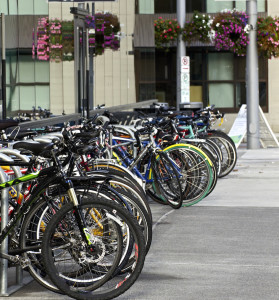 The four proposed bike routes are among the 17 bike type projects for which staff is requesting proposals. If City Council approves the request from city planners on Monday night, five contracts worth $2.2 million will be awarded to four different consultants for design work on these projects, which also include new bike routes on sections of Ross Road, Moreno Avenue and Bryant Street, where an existing bike boulevard would be extended north to Palo Alto Avenue and south to East Meadow Circle.

Consultants will also consider new bike routes in the Barron Park neighborhood and biking enhancements on Homer and Channing avenues.

Though the projects range in size and ambition, most seek to turn major segments of existing streets into bike boulevards — streets with low traffic volumes, traffic-calming features such as speed humps, traffic circles and barriers and lane markings that aim to make it easy for cars and bikes to share the road. Bike boulevards also typically facilitate free-flow travel for bicycles by placing stop signs on streets crossing the boulevard, rather than the boulevard itself.

The Homer and Channing avenues project, which would stretch between Alma and Boyce Avenue, would turn each one-way street into an “enhanced bikeway,” a less intense version of a bike boulevard that relies on lane markings and signage to encourage cars and cyclists to share the road.

In the staff proposal, the 10 projects would be divvied up between two consultants: Fehr & Peers and Alta Planning + Design. In addition, staff is proposing a $275,000 contract with Sandis Engineers to design bike enhancements on Churchill Avenue, between El Camino Real and Castilleja Avenue, and a $737,767 contract with Mark Thomas & Associates for a bike corridor on Charleston-Arastradero Road, between Fabian Way and Miranda Avenue.

The project includes new landscaped median islands, intersection bulb-outs, enhanced bike lanes, trees and streetlights, according to a staff report. The city has already received $450,000 in state funding and a $1 million grant from the Santa Clara Valley Transportation Authority for these improvements.

A fifth contract would also go to Alta for creation of a bike route along the Matadero Creek trail.

The city has also received a proposal from Mountain View-based tech giant Google, which is planning to occupy 200 San Antonio Road, a site that once housed Hewlett-Packard Co. and sits on the border between the two cities.

According to the staff report, Google has proposed to make various improvements in south Palo Alto, including a bike route on San Antonio near U.S. Highway 101; another one on San Antonio between Bryant and Alma; a third one on Alma between San Antonio and East Charleston Road; and a fourth one near Cubberley Community Center on Middlefield.

“Staff sees synergy opportunities in expanding this project to include these bicycle linkages,” a report from the city’s planning department states, noting that Google has agreed to fund “all consultant expenses for these projects directly.”

The ambitious list of biking proposals comes at a time of high enthusiasm on the council for both improving the city for bicyclists and a healthy revenue landscape, which makes it possible for city officials to turn their bike dreams into reality.

In July 2012, the council approved a new bike and pedestrian master plan. Members vowed at the time not to let the document languish on a shelf and collect dust as its predecessor had been doing since 2003.

The new plan proposes to create a citywide network of bike trails and boulevards as well as new connections across existing barriers such as El Camino Real, Alma Street and U.S. Highway 101.

The plan states that Palo Alto can build upon its bike-friendly history and its demand for better bike and pedestrian access “to solidify its status as one of the most bicycle friendly communities in California, if not the country.”

The proposed projects would be the biggest step taken by the city to address the vision of the bike plan since the council committed more than $1.3 million for a new bike bridge over Highway 101, a $10 million project that will be funded largely by grants.

The council is also considering including bike improvements on its list of infrastructure projects that could potentially be funded by a 2% hotel tax increase which voters could approve in November.